The Dead Sea is Dying

The Dead Sea is the lowest tideline on earth, filling the deepest trench of the Great Rift Valley, which begins in Mozambique and runs north to Syria. The border between Israel and Jordan divides it in two, a border that is, unusually in the Middle East, both geological and political: not a line in the sand but a crevice in the earth. Here two tectonic plates are moving apart, ever so slowly, Jordan to the East and Israel/Palestine to the West. To infer meaning from this movement would be easy, but nothing in this region is easy. 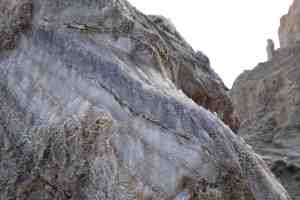 The Dead Sea used to be part of the Mediterranean Sea, a mere depression in its eastern shoreline. Then around 5 million years ago, the crunching plates pushed up the Judean hills, cutting off the water supply to the inland sea left behind. One of the most impressive of these hills is Mt. Sodom, a massif of pure halite, or rock salt. This photo, of a small (80′ x 25′) chunk that broke off and rolled down hill, shows the smooth yet razor sharp material that makes up the Biblical mountain. In the background is Lot’s Wife, a pillar of salt that has eroded away from the rest of the mass. She will eventually come crashing down as well. 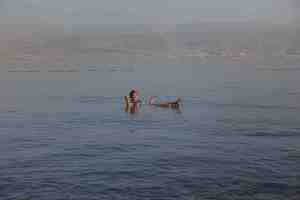 The Dead Sea is dense. With less water coming in than evaporates each year in the desert sun, the salts and minerals have become more concentrated over time, so that the water is now 30% mineral (as compared to the oceans, which are 3% saline). The water is almost 1/3 rock. This is why you float in it. It feels slippery more than wet, because of all the bitumen, manganese, potash, and salt that are suspended in this maximum concentration. Several types of single-celled creatures (halophiles) thrive in this environment, but nothing larger. Unless you count Russian tourists.

The Dead Sea has had various names over time: Salt Sea, Bitumen Sea, Stinking Sea, Devil’s Sea. The water’s very weight makes the surface unnaturally calm and reflective. It glows with shades of lavender, periwinkle, and rose that cannot be adequately conveyed in a photograph (at least, not mine.) But don’t get it in your eyes, because it bites hard. 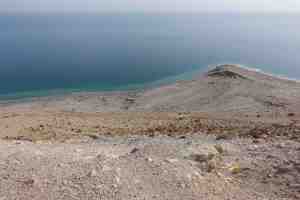 The Dead Sea is dying. The water level is decreasing by more than a meter each year, which leads to a rapidly retreating shoreline, as seen in the photo above. When I was here 25 years ago, the water level was near the road in many places; now you have to take a minibus from the seaside resorts built a generation ago to the water’s edge, sometimes a kilometer away. This is because the only source of new water for the Dead Sea is the Jordan River, which is the northern extension of the Great Rift Valley, and the international border between Jordan and Israel/Palestine. Virtually all of the water is drained out of the Jordan River for Israeli agriculture, though apparently sewage effluent is released into the river so that a small, muddy stream can be maintained for passing pilgrims. 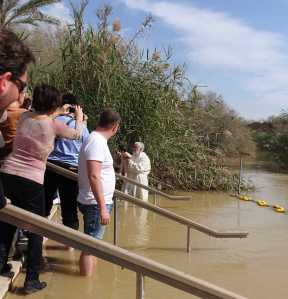 The Dead Sea is already dead. In the 1930s, the Dead Sea Works was formed to mine potash and other salts from the lake’s southern reaches, which were shallow and could be sealed off to create evaporation ponds. These ponds now extend for many miles and are home to one of Israel’s main industrial sites. 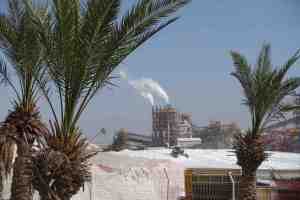 Mountains of minerals are evaporated out of the water and shoveled into piles reminiscent of Mt. Sodom. As the Dead Sea Works floods the ponds each year (thereby lowering the northern half), the water level of this part of the lake rises, causing nearby hotel resorts to build berms that act as beaches, in hopes of keeping the waters at bay and out of their lobbies. 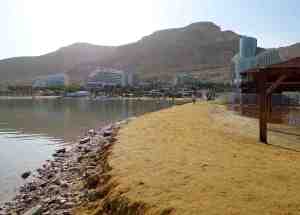 Though the geology of the Great Rift Valley is still under debate, this area is, according to some scientists, an “incipient, oblique oceanic spreading centre.” In geology, incipient means “to come into being or become apparent.”

Spelled with an ‘s’ it has another meaning: lacking wisdom. 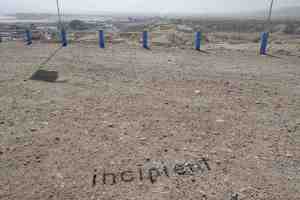